skip to main | skip to sidebar

FAX your PROTEST - 9th May! Demand the release of Jamal Saberi!

Fax the Ministry of Justice in Japan

Dear Friends!
The Doro-Chiba (National Railway Motive Power Union of Chiba) is holding a conference on Japan’s migrant and refugees’ situation and laws this Sunday 9 May. They will be reading a message from Jamal Saberi, the Iranian political activist who is currently in detention and in danger of being deported to Iran. In the past Jamal Saberi has attended several of these conferences as a speaker on the crimes of the Islamic Regime of Iran and in support of workers, women and human rights in Iran. This time however Jamal who is currently being held in a Tokyo detention centre was only able to send a message to the conference when members of the Doro-Chiba visited him in detention.

Three weeks ago, in that very same detention centre, a 55-year-old woman from the Philippines died as a result of the harsh conditions in the detention centre. She is the third person in as many months to die there.

It is an easy thing to do and will have a huge impact. Japan will see that people around the world are against its brutal treatment of refugees and immigrants and it will also show the Japanese authorities that we are firmly behind the struggle to free Jamal Saberi! So please FAX your protest!

There is also a demonstration in front of the Japanese embassy in Washington DC organised by Mission Free Iran on Sunday at 1pm at 2520 Massachusetts Ave NW.

Please find a sample letter to fax below.

To: Japanese Ministry of Justice & UNHCR Japan
I am writing to express my strongest concern over the fate of Jalal Amanzade Nouei (aka Jamal Saberi) who is currently in detention in Tokyo and is going to be deported to Iran from Japan.

Mr. Jalal Amanzade Nouei is a well known political opponent of the Islamic Republic of Iran that came to Japan in 1990. In 1992 he joined the Worker-communist Party of Iran [WPI]. Mr. Amanzade Nouei has been politically active with the WPI and the International Federation of Iranian Refugees (IFIR) as well as the International Committee Against Executions (ICAE) for the past 18 years in Japan, including printing and distributing WPI literature as well as writing several articles against the Islamic regime of Iran, which have been published in Persian and Japanese magazines and websites. He also has organized and participated in major political activities against the Islamic regime of Iran in Japan.

His lengthy political activities with the WPI, IFIR, and ICAE and against the Islamic regime of Iran have come to the attention of the Iranian authorities.
As laid out in the Geneva convention on the Rights of Refugees (1951) Mr. Jalal Amanzade Nouei can become a refugee “sur place” as a result of his own political actions, such as associating with WPI, IFIR, ICAE and expressing his political views in Japan. His political activities came to the attention of Iranian authorities.
It is well known that the Islamic Republic of Iran has arrested, imprisoned, tortured, and killed Iranians who were forcibly returned to Iran if they had unlawfully departed from the Islamic Republic of Iran, had stayed abroad without authorization, and/or had applied for asylum in another country.

I consider the forcible return of Jalal Amanzade Nouei to Iran a violation of the principle of non-refoulement. This prohibits the forcible return of a person to a country where their life or freedom would be threatened. It is a principle of customary International Law, which binds all states. Japan is party to the International Covenant on Civil and Political Rights (ICCPR) which prohibits torture, cruel, inhuman or degrading treatment or punishment.

Mr. Amanzade Nouei clearly fulfils the criteria to be recognised as a refugee as detailed in relevant international instruments. He holds and has expressed opinions not tolerated by the Iranian authorities. His opinions and his relationship to the Iranian opposition organizations which are banned in Iran have come to the attention of the Iranian authorities. He faces a threat to his life or liberty if refouled to Iran.
I urge the Japanese Immigration Authorities to immediately release him and to reconsider its decision and grant him refugee recognition based on his well-founded fear of persecution on the ground of political opinion.

I am awaiting your immediate intervention in this life-threatening situation. Needless to say, UNHCR and the Japanese government will be held accountable for Jamal Saberi's life and freedom.

Sincerely,
Posted by Free Jamal at 02:04 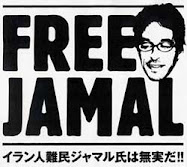 1. To get Jamal Saberi released from detention immediately

2. To stop his deportation order

3. To grant him refugee status